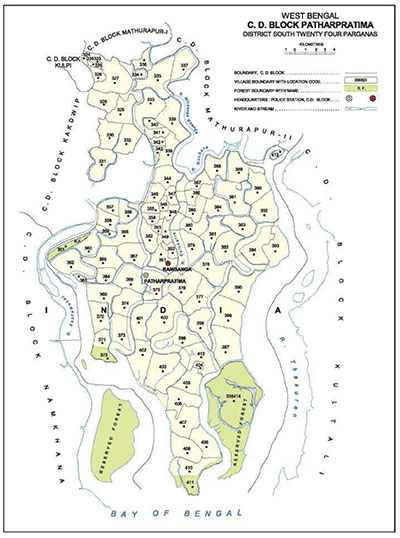 As per the Population Census 2011 data, following are some quick facts about Patharpratima Block.

As per Census 2011, there are total 0 families under Patharpratima Block living in urban areas while 0 families are living within Rural areas. Thus around 0% of total population of Patharpratima Block lives in Urban areas while 100% lives under Rural areas. Population of children (0 - 6 years) in urban region is 0 while that in rural region is 42,021.

In Patharpratima Block out of total population, 141,001 were engaged in work activities. 46.2% of workers describe their work as Main Work (Employment or Earning more than 6 Months) while 53.8% were involved in Marginal activity providing livelihood for less than 6 months. of 141,001 workers engaged in Main Work, 17,007 were cultivators (owner or co-owner) while 24,312 were Agricultural labourer.