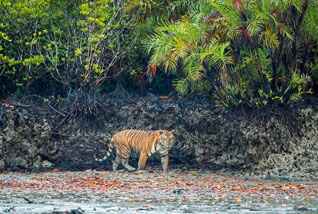 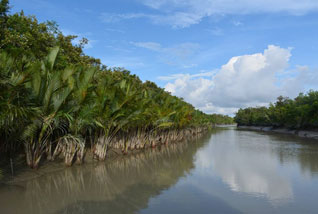 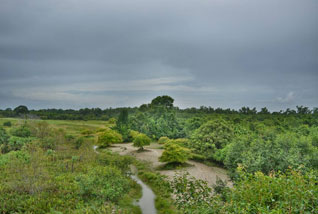 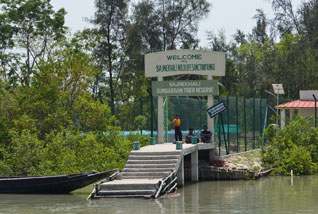 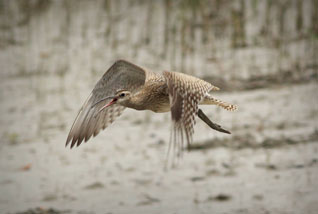 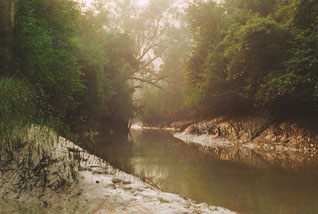 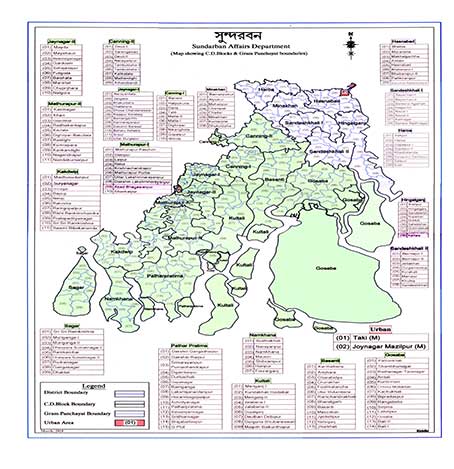 A land of 54 tiny islands, crisscrossed by innumerable tributaries of Ganga that was once infested by Arakanese and Portuguese pirates is now the abode of varied flora & fauna population. An area of 9630 sq. km., where 70 percent is under saline water makes the life of commoners, mostly honey-catchers, prawn-catchers and fishermen, very difficult, and where the estuarine mangrove forest is the habitat of  Royal Bengal tigers, This is Sundarban, the world's largest estuarine forest.
The Sundarban: literally, the Beautiful Forests. Some people, believe that they could, however, have got their name from the profusion of Sundari trees. These forests are extremely dense, often impenetrable, fringed by mangrove jungles and are one of the most intriguing wilderness on earth. Most journeys through these humid forests are done by boat, and it is a fascinating trip. Fishermen’s boats, like black scimitars, drift past, spreading nets for the fish that teem in these rich waters. Near the delta villages the clay is relieved by green vegetation. When the tourist ferry stops, occasionally, visitors walk ashore on palm- and-bamboo jetties to enter forest areas fenced in by bamboo corrals.
These evergreen mangrove forests pulsate with a myriad forms of life. Above the Kingfisher and White-bellied Sea eagle add a brilliant burst of colour. The sea creeps in at high tide. The forests float. The ebbing waters reveal nature so alive on the glistening mud flats. The land is split by numerous rivers and water channels all emptying into the Bay of Bengal. Venture further to discover a rich tribal folklore. It is believed that Bonbibi, the goddess of the forest, protects the wood-cutters, honey-collectors and fishermen on their hazardous missions. For, as the saying goes, `Here the Tiger is always watching you'. The Ganges, which is rightly known as the Ganga, carries silt and fertility from its ice-melt sources in the high Himalayas, through the lush plains of India, past the riverine port of Kolkata. Here, however, it is no longer the Ganga because it has become one of the major distributaries. For, in the flat grey-clay lands of Bengal, the great river splits into numerous channels, dividing and sub-dividing like the roots of a tree, till it pours through many mouths into the Bay of Bengal.
Fiddler crabs extend their cherry-red claws out of their mud burrows; curious, air- breathing, mud skipper fish climb the stilt roots of the mangroves on their flipper-like fins, viewing intruders with pop-eyed amazement. Tribes of honey gatherers live in these dark forests. They believe that the giant, saline water drinking Royal Bengal Tigers always attack from the rear and so they wear masks on the backs of their heads. This is why a posse of armed policemen accompanies all visitors who venture into these beautiful forests. Other wild creatures which lucky visitors might see are spotted deer, boar, monkey, crocodile, python, Salvator lizards, and a wide range of water birds.

The Ganges and the Brahmaputra form this alluvial archipelago of 54 islands watered by the Bay of Bengal. The islands Goasaba, Sandeshkali and Basanti form the northern boundary of the Sundarban; on the south is the sea; to the west side of the Sundarban park is the Matla and Bidya rivers and to the east is the international boundary of Bangladesh.

Sundarban, the place that owes its name to Sundari trees, consist of a large flora population like Genwa, Dhundal, Passur, Garjan and Kankra. Apart from these trees, impenetrable Goran trees between 1.8 mtr and 3.6 mtr high covers almost the entire region. One of the most remarkable features of this place is the bayonet like roots of mangrove forests that stick out above the water level.
Nature apart, if you want to feel the essence of spirituality then this is the place to be. A place of Ma Bonobibi (the goddess of the forest) to Shiber Kumir (Lord Shiva's Crocodile) or from Dakshina Roy (an ogre, the ancestor of all tigers) to Kapil Muni (an incarnation of Vishnu).

Established in 1978 in twenty four Parganas district, Sundarban Tiger reserve is spread over an area of 2608 sq. kms. Sixty percent of the demarcated area of the Sundarban sprawling actually over 9630sq.km, is in Bangladesh. The national park with a core area of 1330sq.km, has been designated as a World Heritage Site in 1985 and is a part of the Project Tiger. The Sundarban has three wildlife sanctuaries at Sajnekhali, Lothian Island and Holiday Island.
The park has estuarine mangrove eco-system as it is situated in the deltaic estuaries of the Ganga and Brahmaputra. The entire inter tidal zone has been designated as Biosphere Reserve under the Man and Biosphere program. This littoral forest supports a diversity of trees and shrubs adopted to conditions and inundation by high tides. Straddling the rivers Hooghly in the west and Teulia in the east the park has many small rivers, forested islands besides the vast stretch of mangrove swamps.

The ideal time to visit the Sundarbans' national park is during the months of September and May. Winter make the time to see the mighty Royal Bengal Tiger sun-bathing on the river banks.